The Pipe Band World Chapionships, as usual, were held on Glasgow Green. 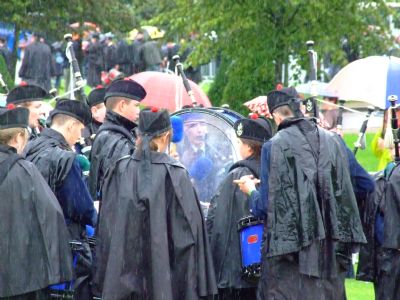 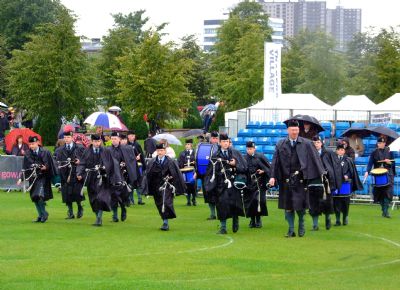 h those of us who were appearing first, the Novice-juvenile Bands squelching through mud.

We tuned up in the downpour under a tree and the quote of our Worlds had to be when Stuart Sheddon, who was helping us tune up, said to Niall Matheson, "Bring the band over there,  There's a bigger, better tree to shelter under."!!!!

For our Qualification Round we had to wear our Inverness Capes and you can see how much it is raining by the picture of us playing in a circle.  Not Pleasant!

By the time we played i 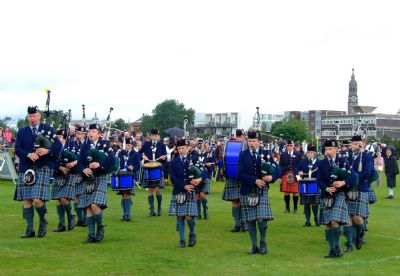 n the final of the Novice Juvenile World Championship the rain had stopped and we could play in our jackets.

Throughout the afternoon the weather improved and it was much sunnier and hot,  Some of the band even got sunburnt.

Quite a contrast to the morning and by the time of the march past and the formation into a massed band we had dispensed with our jackets are were now in shirt sleeves.

All of the Grade 1 Pipe Bands take a forward central position in the arena and then all of the other bands who have been competing, from Grade 2 to Novice Juvenile march past the Gade 1 Bands and form up in ranks behind the Grade1 Bands.

Eventually, when all of the bands have marched past and taken up their position there are thousands of pipers and drummers on Glasgow Green (and a few more that we left behind in the beer tents!).  It's a great feeling to be amongst so many players and the camaraderie amongst the bands is amazing.

We are somewhere in the middle of this picture.  Unfortunately The Ross and Cromarty Pipes & Drums School didn't win but we did make it to the final of the Novice Juvenile World Pipe Band Championships.  The well-deserved Grade 1 winners were Simon Fraser University from Canada. 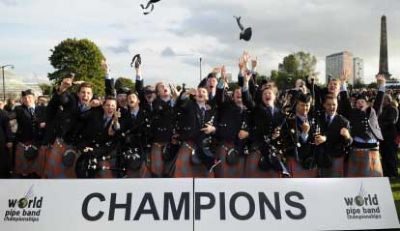 BUT PLEASE COME BACK AFTER YOU HAVE WATCHED IT