Since 2005 I was Pipe Major of this Novice/Juvenile Band. I  relinquished the position in September 2009 when I went to study in Benbecua.

The history of the School is that in September of 2004 Pipe Major Niall Matheson invited 10 of his most promising piping students to an extra tuition session at Alness Academy. Six months later 4 drumming students joined and The Easter Ross Pipes and Drums School was inaugurated. Five years on we were the fastest growing band in the Highlands with over 35 piping and drumming students attending from Tain through to the Black Isle and from Dingwall and are now re-named The Ross and Cromarty Pipes & Drums School.

The Band’s appearances have included playing for the departure of many of the cruise liners at Invergordon including the QM2 and the QE2. They have also played at many Highland events including the Alness Historic Vehicle

Parade, The Glenmorangie Highland Gathering, The Invergordon Highland Gathering and at the Moy Game Fair and at Kinkell Castle. Mini Bands also played at Kintyre House, for the senior citizens in Evanton and also at a Ceilidh in Evanton. Many of our individual pipers were also asked to play at many charity events.

Since June 2006, when The Band started competing, we won 5 trophies and also received a Highland Council Award for our contribution to music in the community.  Sam Shaw, Marcas Robertson and I also played at  Lycksele in Sweden to help celebrate Lycksele’s 400th Jubilee. 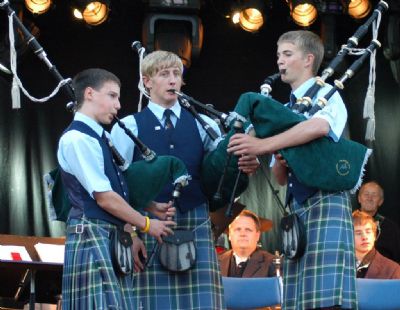 The Band have been complimented by many people in the piping world for their professionalism, dress, decorum and their musical ability. These are just three of the endorsements we have had:-

“Their professionalism and technique is a credit to them. This Band will go far.”

“The enthusiasm, commitment and hard work put in by these young Pipers and Drummers

will pay off in their competitions.”