I was priveleged to help promote the biggest selling bagpipe book of all time, the College of Piping Tutor Book 1, which has been translated into Gaelic for the first time.

The standard for all pipers has sold over 385,000 copies since being published in the 1950s. 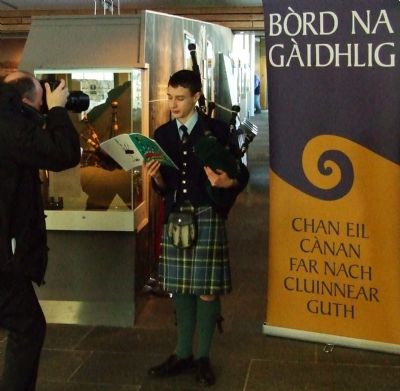 Bòrd na Gàidhlig awarded £5,000 of funding to translate the book into the language of its piping ancestors.

The current book was revised and brought up to date by the current College of Piping Principal, Robert Wallace. It was translated into Gaelic by Finlay and Morag MacNeill of Inverness, both native Gaelic speakers.

Speaking at the launch of the Gaelic version in front of the Balashare pipes at the Culloden Battlefield Visitor Centre, Mr Wallace said:

“I always felt it quite wrong that there was not a bagpipe tutor book in the language of our piping ancestors.“It gives me great satisfaction to know that this project has now put such a book into the public domain. I hope it will be used by Gaelic medium piping students the world over to improve both their piping and language skills. I want to thank Bòrd na Gàidhlig for their support and also the translators for the sterling work they have done.”

“Music and Gaelic culture go hand in hand. The bagpipes in particular have been an integral part of this. We were pleased to be able to help the College of Piping with this exciting project and bring the joy of learning the bagpipe to those who wish to do so in Gaelic.” 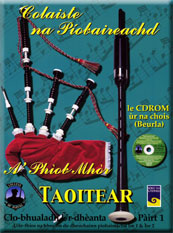 “This new translation of the Piping Tutor is very welcome as it combines pipe music and our Gaelic language, both distinctively Scottish.

“I am strongly in favour of seeing an increase in the publication of Gaelic materials generally and it is right that this book, that has such strong and clear links to the history and heritage of Scotland, should be available in Gaelic.”

The Balashare pipes were reportedly played on the Government side at the battle of Culloden in 1746.