The Summer of 2009 was to be my last appearances with The Ross and Cromarty Pipes & Drums School as Pipe Major.

The last performances with th 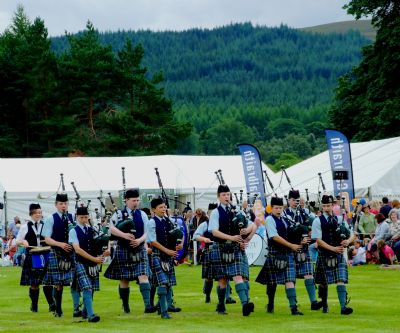 e Band, besides the World Championships, were the Highland Field Sports Fair at Moy, Inverness-shire, where the 400th Anniversary of the Clan Chattan Band of Union was also taking place,  The Clans of Clan Chattan include Mackintosh, Macpherson, Macleans of the North, Farquarson of Invercauld, McBain, MacThomas, Davidson, MacQueen, MacPhail, McGillivray, Shaw and Macintyre of Badenoch.

The Tain Highland Gathering  was a 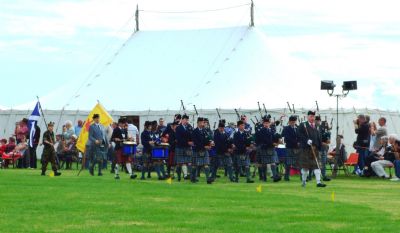 ttended by many members of the Clann Ross who were over in Tain for their Gathering.  It  was another Highland Games that has become a regular for us in the band  Here we are led in the Chieftan's procession by Murray MacLeod followed by members of the Clan Ross.

The last Highland Gathering that we attended of the summer was at Invergordon.  Once again we led the Chieftain's Procession and played throughout the afternoon.

It has been a pleasure being Pipe Major of the Ross and Cromarty Pipes & Drums School over the last four years.